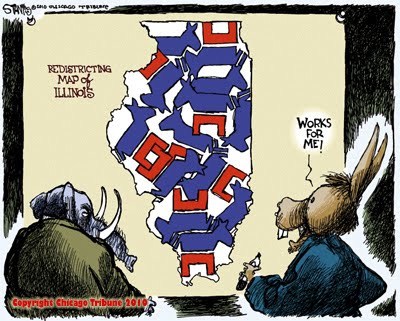 Today, House Joint Resolution Constitutional Amendment (HJRCA) 43 was filed to amend the Illinois Constitution in order to put an end to Congressional and legislative gerrymandering in the Land of Lincoln.

CHANGE Illinois, as a part of the Illinois Redistricting Collaborative, has spent the last four months drafting this amendment and worked with Rep. Ryan Spain (R-Peoria) to get it filed in the Illinois General Assembly. HJRCA 43 is modeled after former Rep. Jack Franks’ proposed amendment: HJRCA 58 which received 105 yes votes from the Illinois House in 2016.

“Our redistricting reform amendment establishes an independent redistricting commission to draw Illinois’ maps and make it clear that the public not politicians should control the process,” said Brad McMillan, Co-Chair of CHANGE Illinois and the Illinois Redistricting Collaborative. “With this amendment now filed, Illinois voters around the state can ask their members of the Illinois House and Senate if they’ll support this specific, concrete solution to end gerrymandering.”

“An independent and transparent process for redistricting is critical for the protecting the core principles of our democracy. For too long, politicians have chosen their voters instead of voters choosing their elected officials,” said Rep. Ryan Spain, Chief Sponsor of HJRCA 43. “Changing the way we draw legislative maps is one of the most meaningful reforms we can make to increase fairness in Illinois. This amendment will have a lasting impact on Illinoisans’ trust in their government for decades to come.”

The Illinois Redistricting Collaborative is currently approaching General Assembly members that co-sponsored HJRCA 58 in 2016 to cosponsor this amendment.

To address gerrymandering, HJRCA 43 changes the current redistricting process by doing the following:

1. Removes politicians and sitting legislators from drawing their own districts

2. Establishes an independent redistricting commission that must be demographically, politically, and geographically representative of our state to draw our Congressional and General Assembly maps

3. Adds sunlight and transparency by requiring the release of all communications made by the Commission as well as any data used to create and propose any and all maps

4. Gives the public the opportunity to participate in the process by requiring at least 30 public hearings on the maps before a final vote is taken

Key differences between HJRCA 43 and the 2016 amendment proposed by Rep. Franks include:

• Commission Make-Up: 16-Member Indep. Commission, with 2 from each judicial district. Political make up: 7 Dems, 7 Repubs. with 2 Independents (tiebreaker commissioner would also be an Independent). Chosen by two justices of the IL Supreme Court

• Public participation: 20 public hearings before maps are proposed, 10 after

• Broadening participation: Hearings must give opportunity for racial & language minorities to participate, request use of technology, e.g. live-streaming, to engage broader audience

• Additional Transparency: All Commission communications & data used to create maps are released to the public & the Commission will be subject to FOIA

• Commission: 8-Member Indep. Commission, with 1 from each judicial district. Chosen by two justices of the IL Supreme Court

• Public participation: 15 public hearings before maps are proposed, 5 after

• Timeline: Maps adopted by June 30, year after the Census for maps, Aug. 1 if tiebreaker commission is needed

You can read the full text of the constitutional amendment (HJRCA 43) here.